Matt first came to us with his truck… a close cousin of Marty McFly’s sweet rig. Before we even saw the truck Matt had freshened up under the hood with a brand-new Toyota short block and rebuilt engine head. A very clean job we must say.

We started out by providing Alcan Spring and lift shackles. After installing these Matt was involved in a bad accident that trashed the cab. He then replaced the entire cab and did a super-clean job. At that time, we installed a crossover steering setup with our HD frame mounts and a high-steer system.

Lately he has been back for a little more work: ORS bumpstop mounts w/ poly bumpstops. These were installed in the front and rear of the truck along with ORS shock mounts and 14″ travel Bilstein 5150 shock absorbers.

A dual t-case with a twin stick from Front Range Off-Road has also been installed. The T-cases are held up by Front Range Off-Road’s heavy duty cross member. Holding to our personal standard of excellence, we tapped the frame in a few spots to run a few lines over it, so as to preserve a clean OEM look as well as to protect the lines from damage. We opted for .120wall tubing on his driveshafts and built the front w/ a long slip setup.

We also installed our new front winch bumper. Matt opted for a nice, aggressive stinger on this bumper. One nice feature of this bumper is that is uses the lower tow-hook holes along with the conventional bumper mount holes. This gives a much greater mounting strength, especially when using a winch. This should solve the long-term frame-tearing problems we see with many aftermarket winch bumpers that only bolt to the front of the frame.

ORS DOM round-tube sliders were also in order along with frame plates on the install. These sliders are constructed from 1.75″ x .120wall DOM tube, some of the best slider material used today. We figure if you’re going to weld them to the frame, weld something that will last to the frame.

Matt was also having problems with his existing exhaust, so we replaced that too. We custom-built a mandrel system that tucks neatly between his frame and body. This left no opportunity for the rocks to destroy our work. A Downey header was already in place. We added a bolted flange after the header, a flex coupler, new converter, another bolted flange, his original Flowmaster muffler, then a high-clearance tailpipe.

Matt’s wheeling ability in his truck is going to be significantly improved now that he has a new crawl speed, a tuned suspension, sliders, and a bumper to utilize. See it on Pirate4x4. 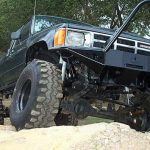 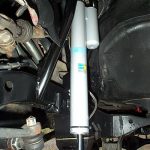 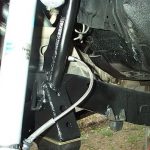 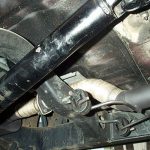 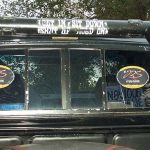 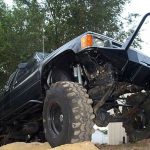 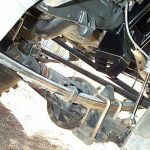 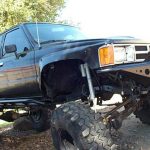 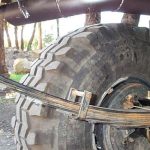 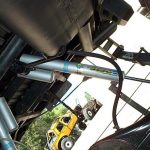 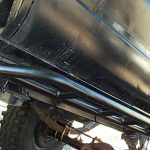 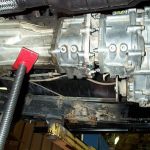 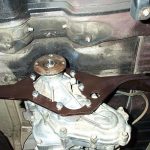 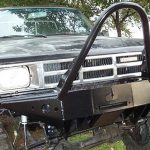 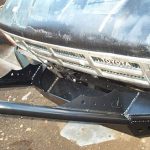 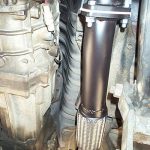 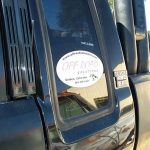